Cardiac arrest is the abrupt cessation of the mechanical activity of the heart, confirmed by the absence of circulation. It has a daily incidence of about 1000 in USA and in the EU. Survival to hospital discharge is extremely low, below 10% on average.

The field of resuscitation comprises all procedures aimed at reversing the cardiac arrest, restoring spontaneous circulation and breathing. In 1992, International Liaison Committee on Resuscitation (ILCOR) was formed to allow cooperation between the different resuscitation councils worldwide, such as the American Heart Association (AHA) and the European Resuscitation Council (ERC). Since 2000, researchers from the ILCOR have reviewed international science and knowledge in 5-year cycles to achieve a consensus on the science of resuscitation. This consensus makes possible to update the treatment recommendations described in resuscitation guidelines.

The ILCOR promulgates the concept of the chain of survival, a metaphor that describes the sequence of actions linking the victim of cardiac arrest with survival. It consists of four independent links:

CPR consists in delivering chest compressions and ventilations to the patient to maintain artificially a minimal but critical flow of oxygenated blood to the vital organs. CPR plays an important role in defibrillation success, since the chance of survival decreases by 10% for every minute with no CPR. The importance of providing high-quality chest compressions is emphasized by resuscitation guidelines.

Defibrillation consists in the passage of high-energy electrical current through the myocardium to terminate certain malignant arrhythmias and restore a perfusing rhythm.

The ALS uses interventions and procedures performed or supervised by physicians. In addition to CPR and defibrillation, ALS uses airway management equipment (intubation, oxygen supply and capnographs) and different drugs administered through a venous line. Additionally, Additionally, ALS uses advanced devices for patient monitoring: monitor-defibrillators, capable of displaying and recording the signals that the specialist analyzes during the resuscitation attempt, including the ECG of up to 12 leads, the capnography signal, the pulse oximetry signal or the compression depth signal. 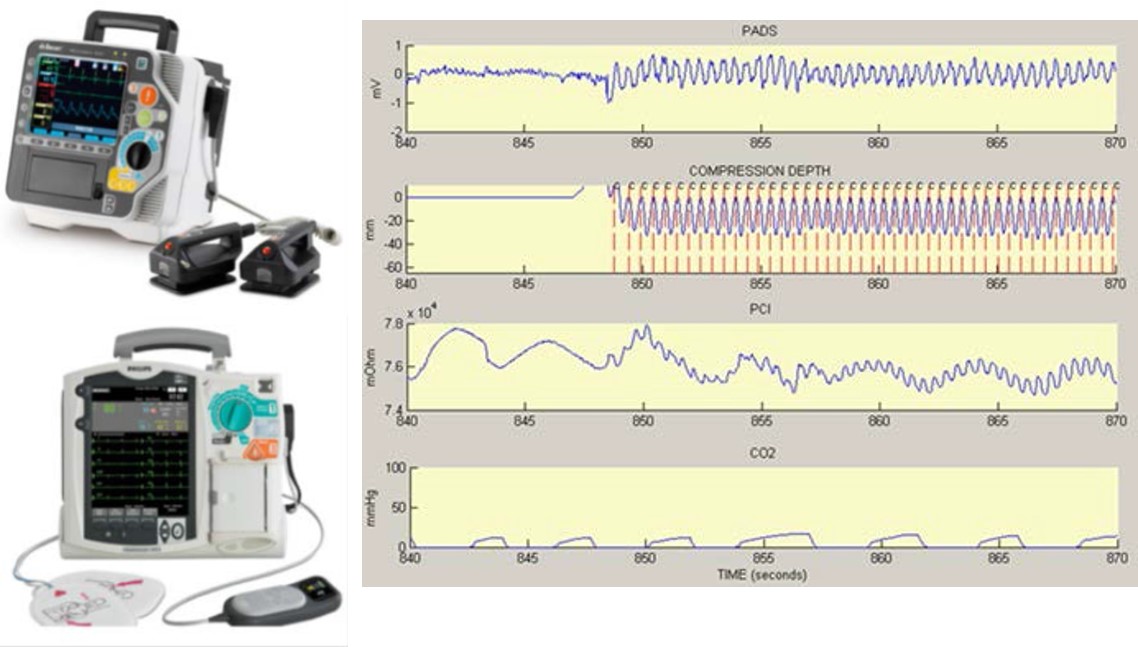 The GSC works has been working in the resuscitation field for 20 years, developing signal-processing techniques applied to different aspects of resuscitation:

The extensive research work in this line has resulted in 6 doctoral thesis.

Currently, we are working on the analysis of the capnography signal. Current resuscitation guidelines emphasize the use of capnography by the ALS as a powerful non-invasive indicator of the hemodynamic response of the patient. However, the information provided by current capnographs during resuscitation (ventilation rate and end-tidal CO2 or ETCO2) is poor and inaccurate due to that chest compressions induce an interference on the capnogram, compromising the clinical interpretation of the procedure.

We believe that, in the future, capnographs will accurately measure ventilation rate and ETCO2 levels, even during chest compressions. Advanced capnographs will guide physicians on the quality of chest compressions, including depth, rate and impulsivity, so that the compression technique can be adapted to the patient's physical characteristics. In addition, capnographs will accurately alert the rescuer if the patient has recovered spontaneous circulation; and they will indicate to medical personnel the prognosis, favorable or not, of resuscitation efforts, trying to avoid the significant percentage of patients who survive but with severe neurological damage.

Up
This research line was created with the support of Osatu S. Coop (Mondragon Corporation, Ermua, Spain). Osatu is a small cooperative, and is the only company in the country that designs, produces and markets automated external defibrillators and monitor-defibrillators. These devices use the trademark Bexen Cardio. This company competes in an extremely demanding market from the technological point of view dominated by multinationals such as Philips, Zoll and Physio-Control. For almost 20 years, we have maintained a relationship of trust and cooperation with Osatu that is productive for both parties and that has enabled relevant technology transfer actions.
Up