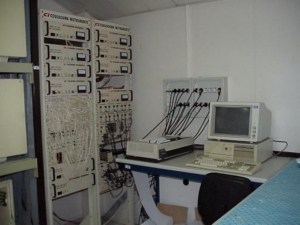 The Animal Unit at the Psychology Faculty is set aside for the housing and upkeep of small animals to be used in research projects and/or teaching tasks at the Faculty.

Specifically, it is essentially used for rats, mice, hamsters and rabbits, although other types of small rodent can also be housed provided that stalling conditions permit this. In principle, these animals will not be bred or reproduced on the premises (except where research is expressly aimed at assessing the effects of some treatment in rat breeding), but rather, acquired from different suppliers of laboratory animals existing in Spain. The latter are establishments which adhere to the regulations in force governing such activity.

2. Location of the Animal Unit

It is located on third floor of the Psychology Faculty building, at Avenida de Tolosa nº 70, in Donostia-San Sebastián.

3. Distribution of the installations

The installations consist of three zones:

4. Request for animals from external suppliers

Requests for animals from officially-authorised breeding and supplier establishments may be made either directly by the User in Charge or through  the Animal Unit Service.

In any event and by way of a prior step, the personnel from the Animal Unit must confirm that there is space available for their upkeep and, if so, will notify the User sufficiently in advance (one week) of the date of arrival of the animals in order to prepare their reception, after carrying out the relevant procedures. Animals must reach the Animal Unit within service hours and always before midday on Fridays. In the event that animals should arrive outside these hours, the user in charge will be responsible for receiving them.

The invoice for the animals requested shall be met by the Department of the User in Charge.

In compliance with Royal Decree 1201/2005 (published in Official Gazette on 21-10-2005), only those animals that come from authorised centres can be admitted to the Animal Unit.

They must be received by personnel from the Animal Unit, examined and suitably stalled in the Quarantine Area to be subsequently housed in the places set aside for such purpose. In the event that the animals should arrive outside service hours, they will be housed in the quarantine area by the person in charge of reception.

The personnel from the Animal Unit will record the entry of the animals and document their origin, filing the relevant delivery note.

Users will inform the personnel from the Animal Unit of approximate stalling time in order to predict the availability of housing with enough time. To this end, the User in Charge will complete an entry form stating the initial number of animals and the number of deaths.  On completion of the experiment, this file will be handed in to the Animal Unit administration.

Animals will be stalled in the relevant housing rooms. A card will be placed on each cage, indicating the following:

On completion of the experiment, the card must be handed in to the secretary's office and the empty cage taken to the cleaning area.

Animals will be fed and cages cleaned by personnel from the Animal Unit, except where the features of the research require that this be carried out by the user.

If under some circumstances users think they are not going to use stalled animals for long periods, this would need to be assessed with personnel from the Animal Unit as to whether they should continue to be stalled or not, given the cost of upkeep and availability of cages.

All handling of animals subject to experimentation will be in accordance with the legal regulations in force and will be the users' responsibility.

There are two basic principles to be taken into account:

To this end, experience of handling animals is required, whereby all people who have no training in the handling of laboratory animals may request advice from the person in charge of the Service.

The handling and treatment of animals will take place outside the housing rooms, except where the experimentation being carried out expressly requires otherwise. The Animal Unit is flanked by two experimentation zones (the Psychobiology Laboratory and the Animal Learning Laboratory) for the handling and treatment of animals, without their needing to be removed from there. The use of these two laboratories will have to be coordinated among the different user groups and the people in charge of the former. Once the experiment has been completed, the user team shall be responsible for cleaning the working apparatus in these rooms and the material used by the team. The animals used must also once again be stalled in a suitable place.

If the experiment is not carried out at the Animal Unit or its attached laboratories, the user may remove the animals from the enclosure. They should, where possible, be returned by personnel from the Animal Unit or otherwise housed in a quarantine room fitted out for such purpose.

If the animals are going to be subjected to experimental infections or treatments using radioactive materials, the person in charge of the Animal Unit must be consulted beforehand so as to take the relevant measures.

All the material that needs to be removed from the enclosure and taken to the laboratories must be returned as soon as possible. The cages must not be labelled (cards must be used) nor subject to any type of transformation (holes, etc.), without the express consent of the person in charge and, in this case, for some highly-justified reason.

Personnel will centralize the storage of corpses in the freezer of the Animal Unit until their collection by the relevant official service.

Animals will be put down in a humane manner and no removal of corpses will be permitted until rigor mortis sets in. Dead animals will be collected in suitably sealed plastic bags for their appropriate removal. No needles or other sharp objects should be inserted in these bags that could cause injury to the personnel who are removing them, nor any other material (gloves, papers, etc.)

In the event of animals infected with microorganisms that could entail risk of infection to personnel or environmental contamination, these must be autoclaved before being handed over to personnel at the Animal Unit for their subsequent removal.

The user group shall be responsible for putting down any animals. The person in charge of the Service may be consulted about this.

The Animal Unit will be open during the hours stipulated on its entrance door.

Those user groups who, for justified reasons, should require to do so, may be given a key to the Animal Unit for the duration of the experiment, being duly responsible for its use.

Access to the Animal Unit Gipuzkoa involves meeting the requirements set forth in the Protocol for access to SGIker and the services it provides.